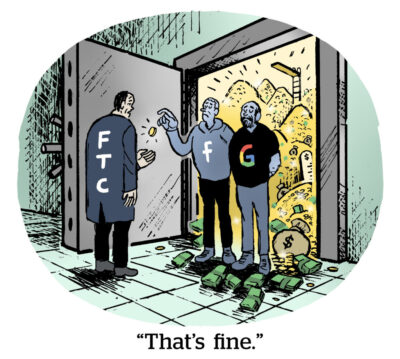 The Justice Department held a tutorial session with a judge and Google’s counsel to prepare for an antitrust trial beginning next year, Bloomberg reports.

The tutorial is a reminder how difficult it can be to manage a Big Tech suit. A judge doesn’t need to know how an automobile works to understand antitrust concerns if, say, one company owned all the dealership lots or made all the engines. But the interconnectedness between search engines and web browsers make it a tricky case for judges with only a glancing knowledge of search engine mechanics.

The case hinges on Google’s default search status across many major companies, making it a “gateway” for the web, argues DOJ attorney Kenneth Dintzer. Apple has Google’s biggest search licensing deal, but it’s also struck deals with Motorola, T-Mobile, AT&T, Verizon and Samsung. (Microsoft Edge is the default on the Edge browser and Amazon Fire Tablets.)

Google argues that the DOJ miscategorizes the search engine market as essentially just Microsoft Bing and Brave, when companies like Amazon and TikTok are serious search challengers.

“Google invests billions in defaults, knowing people won’t change them,” according to Dintzer. “They are buying default exclusivity because defaults matter a lot.”

New Ads On The ’Blox

Metaverse advertising may be here. But not with Meta.

Roblox – arguably the closest thing to a metaverse we have today – is getting into advertising, CNBC reports. The gaming platform is rolling out proprietary ad units called “portals.” Brands like Warner Bros. and Vans have already tested portals, and Roblox plans to go wide with them next year.

How do “portals” work? Brands can create their own games or virtual worlds on the platform. Portal units will appear as virtual billboards that transport players to these branded environments.

Roblox’s entry into the online ad market is an effort to make up lost ground due to a downturn in in-app purchases of Robux. Growth has diminished for its proprietary in-game currency. Also, Roblox loses 30% of each Robux sold, due to the cut it gives to iOS and Android whenever people buy Robux. In contrast, Roblox keeps 100% of ad revenue (h/t @ballmatthew).

Roblox draws 55 million DAUs and 260 million MAUs, 60% of whom are over the age of 13. It has meaningful scale, in other words. But it will have to balance that against the complications of advertising primarily to children and teens.

How To Get From Hear To There

While Apple was debuting its new iPhone, AirPods and Apple Watch models this week, the headphone maker Bose was releasing its new EarBuds.

Bose favors advertising on places like Tidal, a platform known for its superior sound quality, but Mollica cautions that paid advertising “cannot be the primary element of what you do,” Mollica cautions. “We can all skip ads, [which] leads to a much more difficult environment in which to connect,” he says.

But when it does advertise, data is involved. A campaign last year involved 50 different segments. Instead of demographic categories, Bose sought different behavioral and psychographic attributes. “That’s really looking at people, what they think and how they behave. Those content tracks are helping to feed content that will be very different for you and different for me.”

Advertising agencies ask ‘where are all the people?’ in battle for talent. [FT]

Facebook: Deterring ID scraping by protecting our identifiers. [blog] And privacy researcher Zach Edwards has a useful thread on why it’s an important update.

‘Bundle IDs’ that identify the apps where CTV ads play have compromised performance and measurability. [MediaPost]

Shira Ovide: how writing the Times’ On Tech newsletter for two years changed my perspective on tech. [NYT]