Shiba Inu whales scoop SHIB at discount, but is it enough to sidestep this bearish fate?

Shiba Inu price continued its decline for the fifth consecutive day since November 16, 2022. The meme coin has yielded 6% losses despite mass accumulation by whales and can be attributed to the larger bearish market sentiment.

Also read: Shiba Inu price is on the cusp of printing its worst performance for this year

This accumulation by long-term investors is considered a bullish indicator for the Shiba Inu price. SHIB whales typically accumulate the meme coin during its downtrend and profit-taking follows soon after.

Shiba Inu price has been in a prolonged downtrend for nearly a year now, slipping 90% below SHIB its all-time high of $0.000086. Based on data from Etherscan.io, another mysterious whale added 220.97 billion SHIB tokens to their wallet in a single transaction on November xx . The whale now holds a total of 546.86 Shiba Inu (SHIB), worth $4.99 million.

While the market outlook is bearish, these purchases by whales can be bullish for the Shiba Inu price in the long run.

Shiba Inu price decline failed to dampen the sentiment among SHIB token holders. 52% of the investors have held their SHIB tokens for longer than a year. Despite the recent crypto bloodbath and decline in Shiba Inu price, holders SHIB bags, signaling investor confidence.

Shiba Inu token transfers for the past 30 days

What’s more there was a spike in transactions worth $100,000 or higher, in the Shiba Inu ecosystem. Whale movements are captured through this statistic, 38 high volume transactions fueled a spike in on-chain activity in Shiba Inu. Whales activity is an indicator of a

Shiba Inu price is heavily correlated with Bitcoin. Based on data from IntoTheBlock, Shiba Inu’s correlation with Bitcoin is 0.9, which is not a good look for the meme coin.

A high correlation will put SHIB at the behest of Bitcoin price and its volatility. Since BTC is still reeling from  FTX’s collapse the meme coin will likely continue to follow Bitcoin’s footsteps.

Additionally, Bitcoin price is in lockstep with the moves of the FTX hacker who siphoned $600 million from the bankrupt exchange FTX. As reported, this exploiter swapped his ETH for renBTC, triggering a market sell-off. RenBTC is essentially Bitcoin bridged to the Ethereum blockchain and is backed 1:1 by BTC.

Shiba Inu price is 90% below its all-time high, after a prolonged downtrend. Filip L, a technical analyst at FXStreet argues that SHIB could soon print a multi-year low.

Shiba Inu price received a firm rejection at the psychological level of $0.000010, accelerating its decline. Filip believes Shiba Inu price could plummet to $0.00000507 as the crypto market recovers from 2022’s key events, the LUNA stablecoin debacle and FTX crash. Leading crypto broker Genesis halted repayments and withdrawals in the aftermath of FTX exchange’s bankruptcy, adding fuel to the fire. 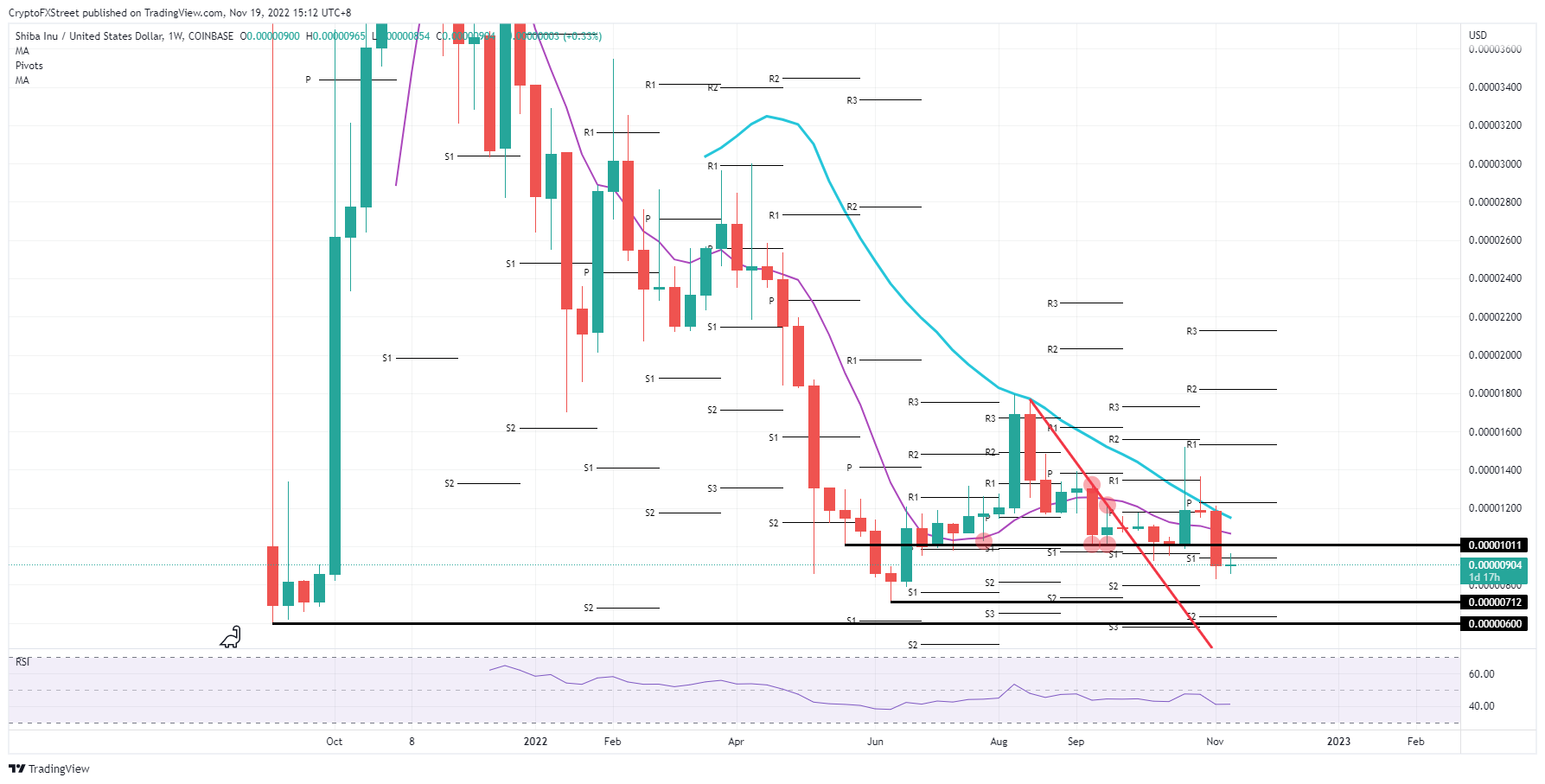 Filip’s bearish thesis is likely to be invalidated if the spread of the FTX contagion is contained, allowing Shiba Inu price a chance to recover above the S1 support level and hold above the $0.000010 psychological level. If successful, SHIB could climb higher.