Crypto outlook on Ethereum and Cardano 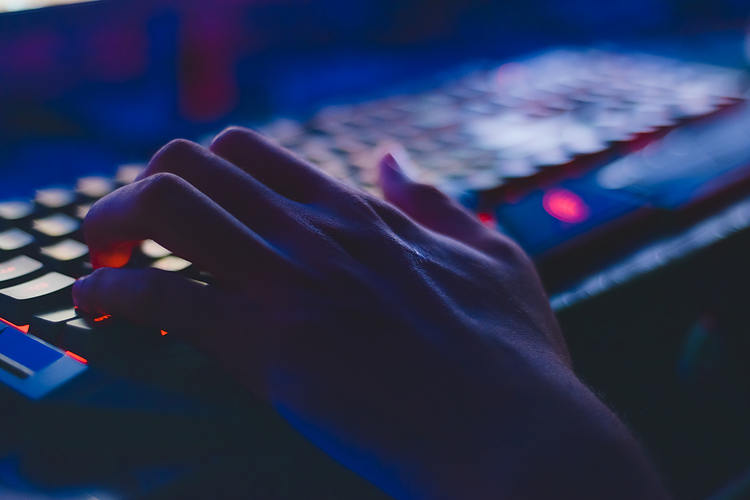 The whole crypto market is bleeding like never before, wiping out billions of dollars on a weekly basis. While Terra Luna started the crypto market crash, it seems that the FTX collapse may be the end of the bear market.

At first, it looked like Ethereum is going to break the trend line and move higher. However, ETH clearly rejected to rise and is slowly but surely declining toward June’s support of $876. The FTX contagion is spreading throughout the whole crypto space, causing massive price declines. One thing is for sure. Trying to guess the bottom is almost impossible, that is why some investors focus on dollar-cost averaging.

However, several signals point to a possible trough in the upcoming weeks. Until Ethereum doesn’t break the trend line, there is no uptrend. As the panic spreads over the whole market, many investors dump their holdings. That may cause Ethereum to test June’s support, or even go below it.

Ethereum is currently breaking a local support at $1,080. A temporary bounce upward may occur, but ETH is still most likely to move to June’s level because of enormous selling pressure in the crypto market.

When that level is reached, traders may start thinking about long positions again. Ethereum is down around 80% from its peak at the moment. However, the previous bear market in 2018 drew ETH 93% down and also lasted one year. In terms of time, cryptocurrencies may be ready to take off, but they need to bottom out first. 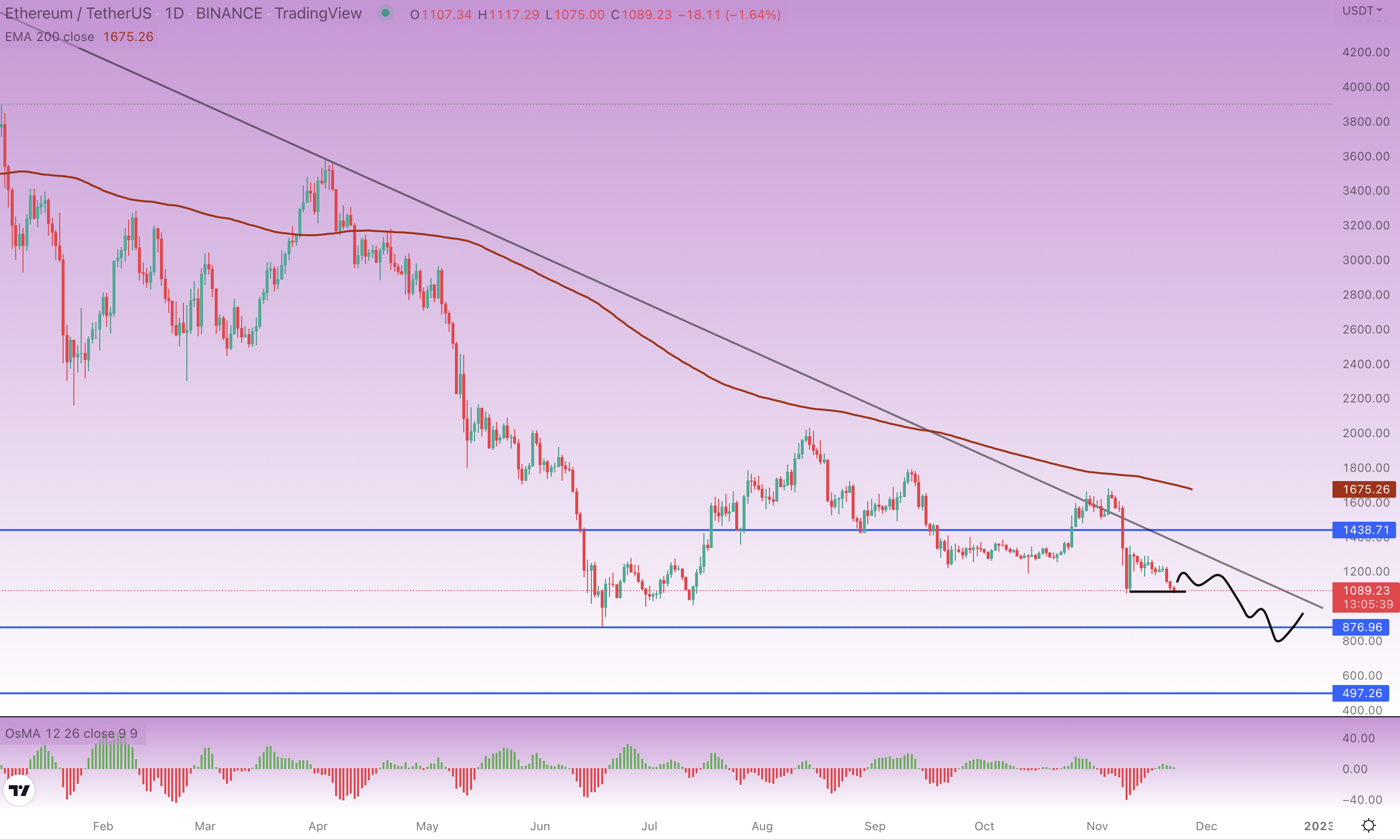 ADA did a 100x growth from early 2020 to late 2022 and Cardano’s price development (as well as the technology behind the token) is very similar to the one of Ethereum in the last bull cycle. Cardano also dropped by more than 90%, looking for a bottom. Now it’s falling after breaking a crucial support $0.39 and moving below the triangle formation on a daily timeframe. 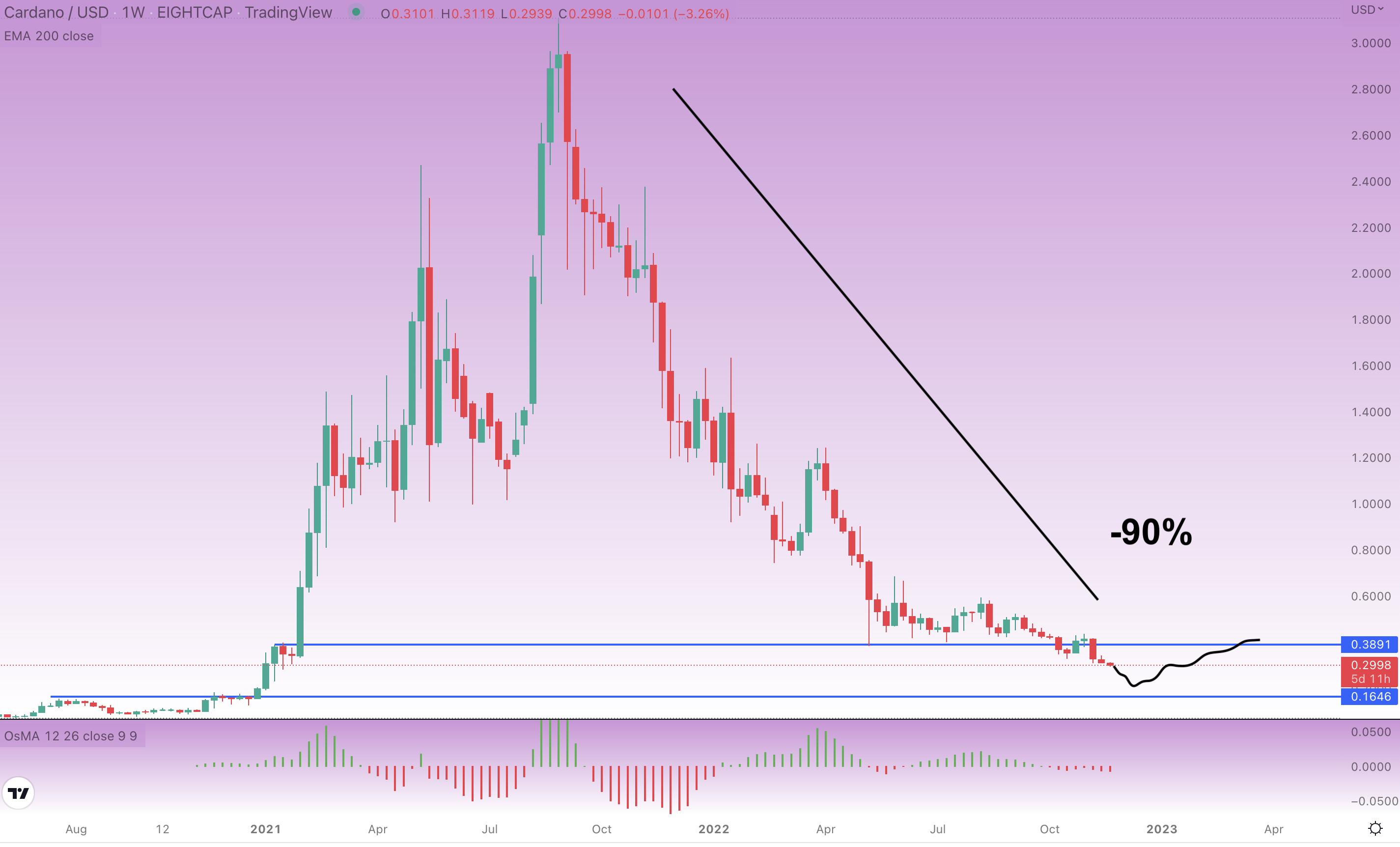 Cardano bounced from the trend line several times, always falling lower. ADA is one of the most favorite cryptocurrencies by the crypto community with a great technology. ADA is down 25% since it broke the support level and will probably even move lower. If Cardano was to repeat Ethereum’s price development from 2018, it would fall to approximately $0.20.

The weekly chart suggested that the support $0.164 is the closest level and Cardano could bottom out there as it did previously at $0.389. However, the current bear market in terms of time and price declines is one of the toughest ones, suggesting a relief rally could occur after this drop is completed. 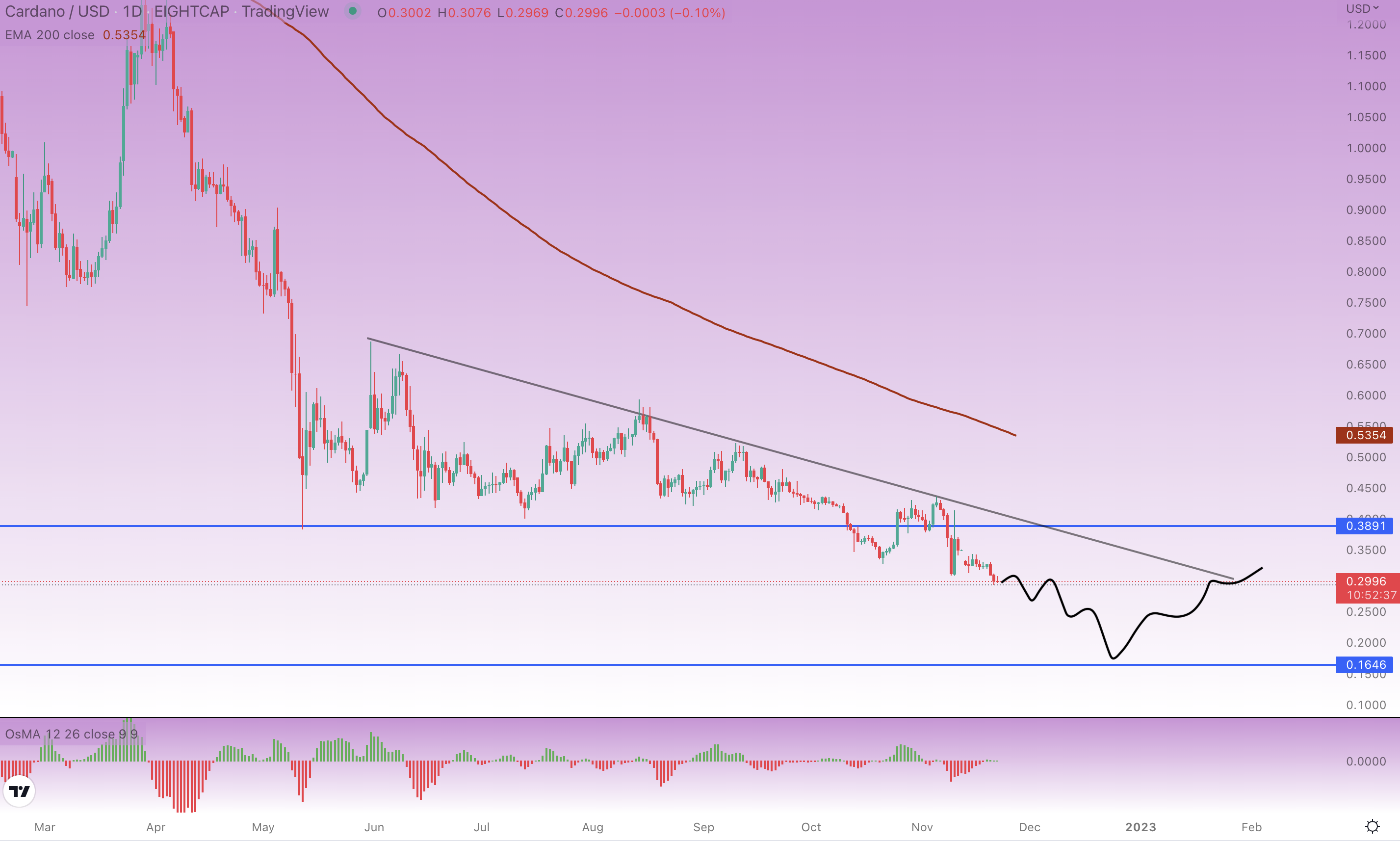 A new year is coming, which is a sign of u-turns in all markets most of the time. This doesn’t necessarily mean it’s the end of the bear market, but after Ethereum falls to approximately $850, it could reach at least $1,500 or $2,000 the next year. However, the trend line must be broken to end the current dowtrend.