Chipotle CMO Looks Back On One Year In The Metaverse: ‘There’s Nothing Worse Than Branded Content That Sucks’ 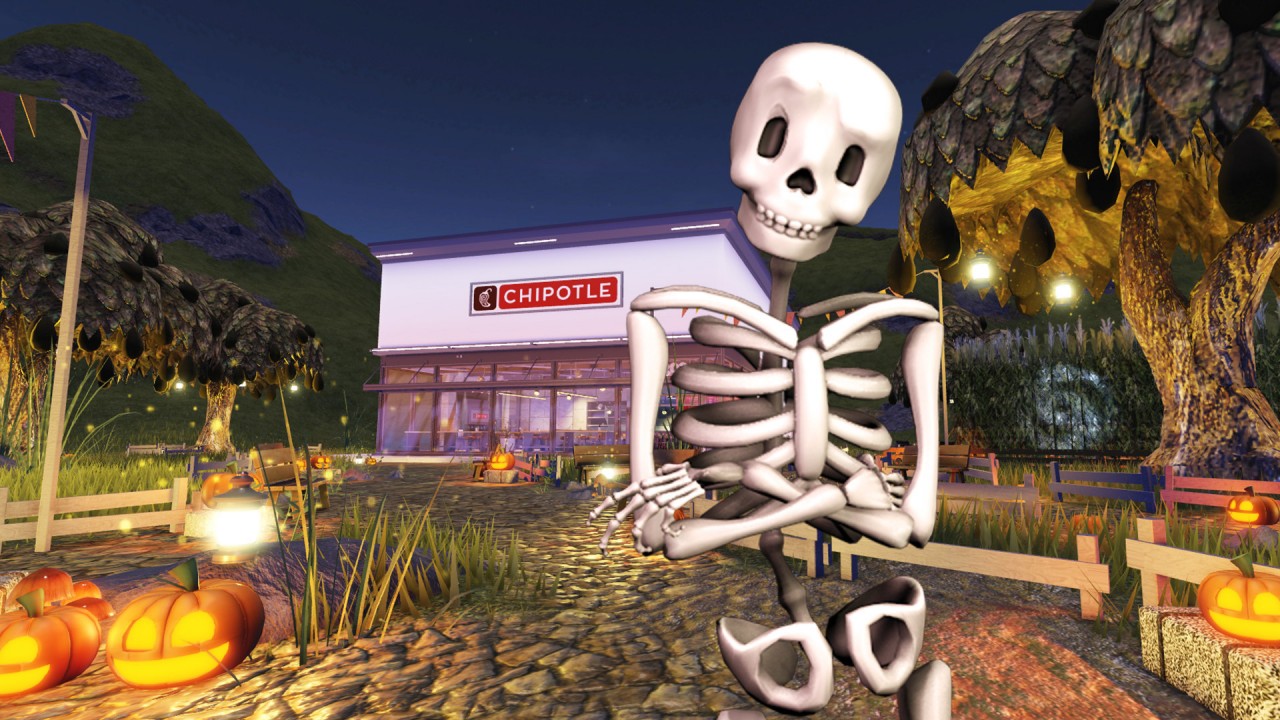 Chipotle launched its first branded Roblox experience in October 2021. Subsequently, the popular chain has strived to expand its presence on the platform and position itself as a forward-thinking, tech-savvy brand. In an exclusive interview with The Drum, Chipotle’s CMO Chris Brandt reflects on the brand’s year in the metaverse, how to not be lame on Roblox and why you shouldn’t trust your instincts in this strange and unfamiliar virtual space.

Since 2021, the metaverse has become a key area of focus for a growing number of brands — a virtual goldmine of opportunity that promises vast new marketing opportunities, new revenue streams and new modes of engagement with Gens Z and Alpha.

The problem is that the metaverse is notoriously confusing. Though it’s a tipic that’s often bandied about in board meetings, many brands are struggling to understand how they can establish a legitimate presence in this (still quite vague) virtual world. A small handful of brands, however, have managed not only to establish their presence in the metaverse but also to build virtual experiences that are rich and engaging for their audiences.

This is no small feat. The metaverse can feel like a foreign country, rife with unfamiliar lingo and customs. At the moment, “the metaverse” is largely synonymous with gaming, specifically online multiplayer games like Roblox and The Sandbox. This is a community that’s overflowing with devoted members who are, generally speaking, well attuned to corporate bullshit — that is, they can tell when a company is trying to enter the space, acting like they belong, when it’s clear they haven’t put in the work to understand how that community works. It’s a bad look, like Steve Buscemi holding a skateboard and trying to blend in among teenagers. (“How do you do, fellow kids?”)

One brand that’s managed to tread the knife-edge of establishing a foothold in the metaverse is Chipotle Mexican Grill. Just over one year ago (in October 2021), the multinational restaurant giant made its debut with the launch of the Chipotle Boorito Maze — a Halloween-themed virtual restaurant — on Roblox. (According to Chipotle, this marked the first time that any restaurant had launched a branded activation on Roblox.) The activation was a hit: it sparked the greatest single-day numbers of app downloads, promo code redemptions and digital transactions in the company’s then-19-year history.

Since then, Chipotle has gone on to launch two additional activations in Roblox: The Chipotle Burrito Builder (in which visitors are challenged to roll virtual burritos) on April 7, and the Chipotle Grill Simulator (which was built to debut a new IRL steak menu item).

How has the brand managed to find and maintain success in the metaverse over the past year? The Drum caught up with Chris Brandt, Chipotle’s chief marketing officer, to find out:

How and why did the brand first start to develop experiences in Roblox?

”We thought the opportunity was certainly interesting: The numbers that Roblox has are absolutely crazy — with 50 million daily active users, 200 million monthly active users. When we approached it, probably in August or so of 2021, Roblox had been on people’s minds, because we have a lot of employees in the office who have young kids, and they were playing it. I remember the team coming to me and saying, ‘here’s our idea: We’ll do a burrito maze … And boy, it just made me nervous, because the potential for that to be lame was really high. And the important thing, when you’re showing up in a new place, is that you do it in exactly the right way, and you do something that the brand’s really proud of, because so much of the metaverse and gaming in general is about the community — what are you kind of doing to advance the community? And so I told them ‘we can build this, but if it’s not good, we’re not going to launch it. And boy, was it great.”

Can you say more about what a “lame” outcome would have looked like?

”A lot of times brands do stuff that just doesn’t look good … it doesn’t feel like an integrated part of the game, it’s not aspirational. I just wanted to make sure we weren’t doing something that just didn’t look or feel good. Clearly, that wasn’t the case. It looks absolutely terrific. There’s nothing worse than branded content that sucks, because it reflects really poorly on the brand, and you only have one chance to make a first impression with people. There’s a little bit of risk going into anything for the first time, but I just wanted to make sure visually it looks good and that it works smoothly. I didn’t want to launch a Pac-Man-like experience on something like Roblox; it needed to look good. It needed to feel good. It needed to feel like it was a native part of that platform. And I think the team did a great job of making all that happen.”

How did you ensure that you were launching experiences that would resonate with the Roblox community?

“We started out the right way, and we didn’t just bring some celebrity there to have a bunch of autograph signings at some event. That’s the lame way to do it. We wanted to make sure we were doing something for the community. So when we did the Roblox [activations], we wanted something people would want to play, that it looked really good, that the gameplay was smooth, that would add to Roblox and not be a joke. I don’t know that our second one would have been as good if the first one wasn’t great. Sure, you can correct things along the way, but if you start out poorly, people just won’t come back. Nobody on Roblox needs to go to the Chipotle Boorrito Maze. No one does. But if you can make them want to do it, then that’s pretty huge.”

Any advice for other brands looking to enter this space for the first time?

For more, sign up for The Drum’s Inside the Metaverse weekly newsletter here.