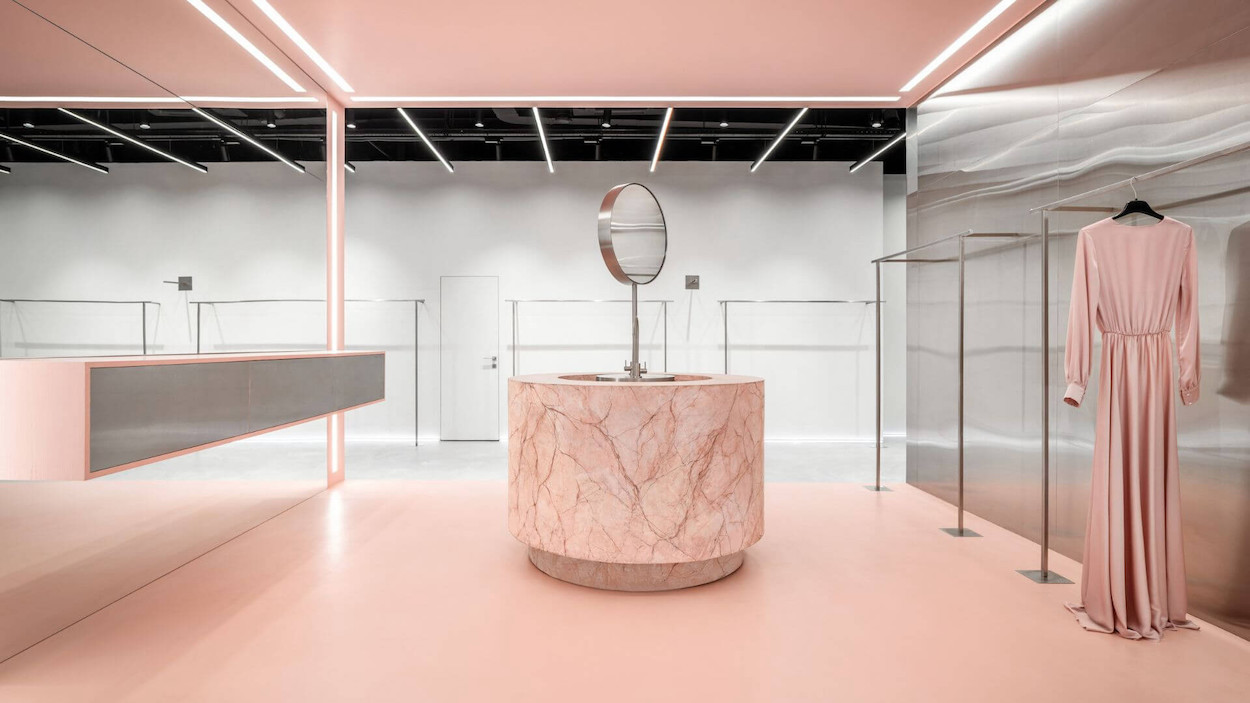 The Design Dispatch offers expertly written and essential news from the design world crafted by our dedicated team. Think of it as your cheat sheet for the day in design delivered to your inbox before you’ve had your coffee. Subscribe now.

Have a news story our readers need to see? Submit it here

Ukrainian grit is the stuff of legends, so it’s no surprise in the aftermath of Russia’s assault that Cher17 forged ahead with plans to open a sleek boutique in Kyiv. Local studio Temproject envisioned a minimalist three-room shop “created in the aesthetics of a virtual space,” says designer Anastasia Tempinska. The result is an impossibly polished store that nods to the metaverse’s immersive interiors with high-impact color moments, neotenic furniture, and some made-for-Instagram vignettes with mirrors and artwork. The brand, founded by Tetyana Parfiliyeva and Velyka Vasylkivska, sews balaclavas and outerwear for the Ukrainian military and plans to fête victory with a glass of sparkling wine from the showroom’s pink granite tap. –Jenna Adrian-Diaz

The Yale Center for British Art in New Haven will close for a year-long renovation.

The Yale Center for British Art in New Haven will undergo a year-long renovation focusing on exterior improvements, particularly the roof and domed Plexiglas skylights, which were described as the museum’s “fifth elevation” by architect Louis Kahn. The renovation follows more than a decade worth of research on the building that was published in the 2011 book “Louis Kahn and the Yale Center for British Art: A Conservation Plan” by Peter Inskip and Stephen Gee. The museum, which opened in 1977 and houses the largest collection of British art outside the United Kingdom, will close to the public on Feb. 27 for the project. Upgraded lighting systems and more energy-efficient features are also planned, as well as a “reconceived installation of its collection” when it reopens in 2024.

A German museum is struggling to repatriate human remains with traces of pesticides.

The repatriation of human remains of 28 members of the Huki and Hitorangi clans of the Rapa Nui nation from Leipzig’s Grassi Museum of Ethnology is facing delays due to the presence of hazardous pesticides. The remains were taken from their original resting places by a German gunboat expedition in 1882 and ended up in the collections of the states of Saxony and Berlin. The historical use of pesticides means objects in their storage halls are both toxic in terms of their problematic colonial heritage but also in terms of them being contaminated with highly hazardous substances. The notion of these objects being used in ceremonies and ritualized performances, scientists warn, could prove harmful while they pose a risk to the health of those handling them.

New York is joining California in banning toxic “forever chemicals” from clothing, under a law signed by Gov. Kathy Hochul just before the new year, garnering widespread support from environmental activists. The bill, passed by the state legislature in May, will amend New York’s environmental conservation law to eliminate the use of perfluoroalkyl and polyfluoroalkyl substances (PFAS) in apparel by Dec. 31. Known for their propensity to linger in the environment and human body, these chemicals are linked to kidney cancer, testicular cancer, and other illnesses. The California bill mandates that no individual will be able to distribute, sell or offer for sale new textiles that contain PFAS beginning on Jan. 1, 2025.

Austin is rising to new heights with the development of two supertall skyscrapers set to reshape the city’s skyline. The Waterline and Wilson Tower, designed by Kohn Pedersen Fox and HKS, respectively, will tower over the city at more than 1,000 feet tall. The Waterline, set to be completed in 2026, will become Texas’s tallest building, while the Wilson Tower, slated to break ground this year, will set a height record for U.S. residential high-rises outside New York City. Both supertalls symbolize Austin’s economic growth, driven by a recent influx of high-tech manufacturing and investment in the city’s infrastructure. “Just knowing about the way that the city has been very specific about the downtown core area, and where they want height and growth and density, there is a potential for others in the neighborhood,” Brad Wilkins, Austin studio design leader for HKS, tells Bloomberg. “I expect we’ll keep hearing about tall towers in downtown Austin.”

Guillermo Chamorro, a Spanish collector, is facing charges of intellectual property theft and fraud for allegedly forging and selling 15 works by artists such as Roy Lichtenstein, Edvard Munch, and others. The prosecutor’s office in Madrid is seeking a six-and-a-half-year prison sentence for Chamorro, who has been connected to several suspected forgeries. Spanish police have so far recovered 10 of the 15 pieces Chamorro is suspected of forging, with the remaining sold to collectors by auction house Setdart in December 2018.

The San Francisco gallerist who hosed down an unhoused woman will be charged.

Collier Gwin, the gallery owner who was caught on video spraying a homeless woman with a garden hose, was arrested in San Francisco on Wednesday. Gwin, whose actions were described by District Attorney Brooke Jenkins as “completely unacceptable,” will be charged with misdemeanor battery for the incident. This arrest comes after the subsequent vandalism of Foster Gwin Gallery, which had a door smashed and boarded up two days after the video went viral. If convicted, Gwin faces up to six months in county jail and a $2,000 fine.

These otherworldly photos capture life within a single drop of seawater.

A shoplifting spike is causing drug stores to put products behind plastic.