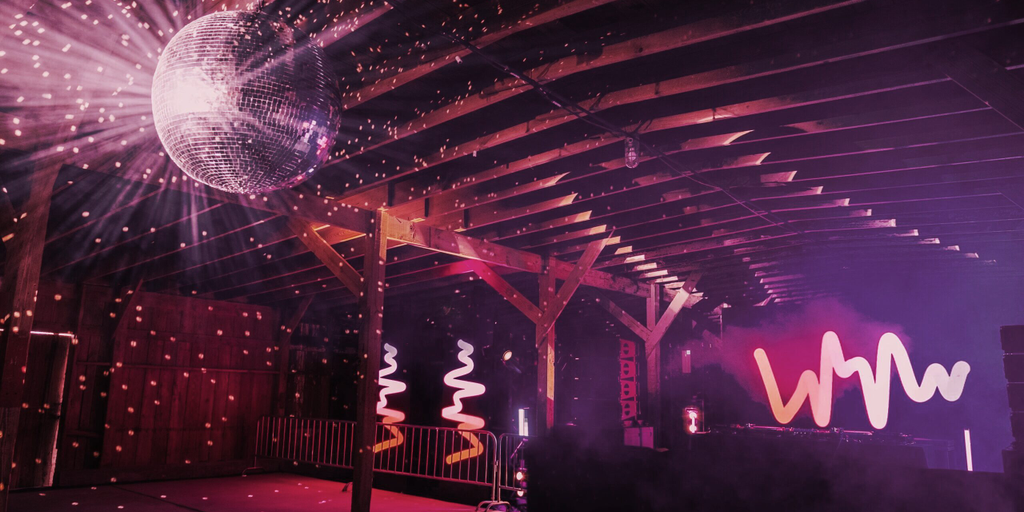 The world’s No. 2 cryptocurrency exchange had just filed for bankruptcy, its boy genius CEO had resigned, and millions upon millions of dollars were disappearing from his company’s wallets in real time with no explanation. But hundreds of miles from the noise of urban financial panic, in an old cattle feed mill in the West Texas desert, dozens of crypto culture makers bobbed their heads and waved their hands to a synchronized display of vibrating squiggles.

The squiggles were Chromie Squiggles, the second explosively successful generative NFT art project from Art Blocks. To the delight and apparent awe of the barn’s occupants, these usually-static Squiggles were dancing for the first time, in sync with the ear-splitting tunes of English DJ Jamie xx.

“Pray to the squiggle!” his friend yelled giddily.

It was November 11, 2022, and 500 admirers had descended on the tiny town of Marfa, Texas, for Art Blocks’ second annual Open House—a gathering of collectors, artists, investors, and schmoozers involved in the company’s growing ecosystem.

One might assume the vibes at an event centered around non-fungible tokens—which in the last two years have won obsessive devotees and furious haters in equal measure—would be deeply affected by the pulse of the crypto market. And yet, the FTX armageddon felt as far away from the gathering as any big-city happening back in the times when news was delivered by covered wagon.

That wasn’t because NFT people feel immune to market fluctuations. According to the event’s host, Art Blocks founder and Squiggles artist Erick Calderon (aka Snowfro), it was because the gathering, and his NFT company, have pretty much nothing to do with NFTs, and even less to do with crypto.

As Calderon sees it, far too many companies in the crypto ecosystem hinge their value propositions on the novelty of underlying technology. Jogging—but earning crypto! Sweatshirts—but in the metaverse! Cat pictures—but make them NFTs! A mediocre TV show concept—produced by a DAO!

This fixation, he believes, only temporarily obfuscates the deficiencies of a company’s product.

“Why are we betting our companies on nascent technology? Companies don’t survive just on crypto,” Calderon said. “They survive on culture, and they survive on their teams. We’re trying to be an adult company. That means creating internal organizational culture, which is really hard to do in crypto, where everybody’s remote and hinging on the price of a CryptoPunk. But we fought so hard to isolate ourselves from that.”

Art Blocks is a 40-person company and growing, despite the devastating effects of the crypto bear market. It now boasts a full curatorial team that carefully selects and admits digital artists to debut their collections on the company’s massively popular platform.

Calderon attributes Art Blocks’ enduring success to its refusal to indulge in practices that became standard for most NFT projects at the height of the speculative bubble in early 2022.

“The worst mental health state I’ve ever been in was when Art Blocks was going crazy in October,” he said. At that time, Art Blocks NFTs were selling for millions of dollars apiece. “People were like ‘you need a token, reward your collectors, you don’t care about your collectors unless you do a token, look what SuperRare is doing, look what Bored Ape Yacht Club is doing.’”

Art Blocks never offered a token, or exclusive perks, or any other vague gesture at that frequently fetishized but rarely realized principle of Web3: “utility.”

It offered art, and publicly-accessible community spaces (both digital and physical) focused on art. It emphatically resisted the temptation to provide anything else.

If Art Blocks sees itself not as a crypto or NFT company, but as an art institution, nothing showcased this better than its three-day gathering in the fabled art Mecca of Marfa.

Marfa was founded in the 1880s, and for almost a century, looked no different from any other neighboring town populating the sparse Chihuahuan Desert; it rose to international prominence in the early 1970s, when renowned artist Donald Judd bought up a number of the town’s buildings and transformed them into contextless “anti-museums” for his gargantuan concrete and metal installations, as well as the works of other artists. In the decades following, Marfa’s artistic reputation and exotic isolation attracted thousands of disaffected city folk. Today, the town resembles some strange mix of Frontierland and Williamsburg, populated by barns, shuttered storefronts, art galleries, and matcha-slinging coffee joints alike.

Art Blocks opened its Marfa gallery in 2021. Some at the time colored the company’s arrival in Marfa as unwelcome, and Art Blocks’ crypto-tainted offerings as a marked departure from the town’s esteemed artistic tradition.

I found no such tension in Art Blocks’ presence in Marfa.

“I think they’re a brilliant addition to Marfa, and I think they’ve integrated well to the scene,” Rachel Beitz, owner of Rule, a gallery down the street from Art Blocks, told me. “I can’t think of anybody who’s spoken badly of them.”

Beitz also dismissed the notion that an art collection’s medium alone—including the baggage-laden blockchain space—could be determinative of a project’s artistic legitimacy.

“The entire history of art is the next big thing not being considered art to the key holders of what ‘art’ is,” she said. “Marfa is a place where a lot of people come to experiment. To me, it’s almost a natural thing that this would be one of the places people come and try this.”

Art Blocks’ projects are most obviously distinct from traditional art in two ways. For one, they are NFTs, minted on the Ethereum blockchain and purchasable by anyone with an internet connection. For another, they are generative. Artists construct computer code that sets parameters for what an Art Blocks piece can look like; upon minting, the piece is randomly generated within those parameters, appearing in its realized form for the first time.

“The NFT part is not that hard to explain. But when you dive deeper into long-form generative art, that’s when it starts to get a little more complicated,” Plutonium F, a pseudonymous Art Blocks collector, told me about the hurdles he faces when discussing projects with outsiders.

Plutonium, along with two other Art Blocks collectors, were selected by the Art Blocks team to curate the collection on display at the November open house, which they titled Perspectives.

“I know that it’s hard for traditional collectors and traditional artists to grasp the idea that you write a piece of code, and it can create essentially an infinite number of outputs,” said Proper, another one of Perspectives’ community curators. “But in the best examples of generative art, the art is the code itself. It’s easy to be a painter. It’s hard to be a good painter. It’s easy to be a generative artist. It’s hard to be a good one.”

After a tequila-soaked weekend in Marfa, Art Blocks faithful flew back to their home cities, back to reality, back to a world that was finally, breathlessly paying attention to their industry—but for all the wrong reasons: bankruptcies, contagions, criminal charges, government investigations, and waves, upon waves, of layoffs.

Crypto winter kept getting colder. The new year has brought no relief.

But somehow, through the darkness, Art Blocks continues to soar. Friendship Bracelets, an Art Blocks project conceptualized by Calderon and realized by French artist Alexis André, was released exclusively for existing Art Blocks NFT holders in late October. When that free-to-mint claim window closed on Tuesday, the collection’s value skyrocketed, becoming the top collection on NFT marketplace OpenSea within hours. Friendship Bracelets have, at the time of writing, generated over 14,300 ETH in trading volume (roughly $20.3 million).

That’s a standout in an otherwise dismal market. NFT trading volume has plummeted a staggering 87% from last January’s highs. Blue-chip profile picture (PFP) NFT projects that were once sure bets aren’t looking so sure.

Why isn’t Art Blocks suffering too? Calderon thinks the answer is pretty simple.

“If [Art Blocks holders] bought a piece of art, and they hung it on their wall, and that piece of art went to zero, they still have a friggin’ awesome piece of art,” he said.

How many other NFT projects can say the same? Strip away speculative value, the crypto marketing angle, the laden NFT acronym; what’s really left? If seen as an NFT company, Art Blocks appears to be an aberration. If seen as an art collective that happens to use blockchain technology, things start to make a lot more sense.

Non-crypto companies using Web3 technology as a tool to realize larger goals—be they related to entertainment, commerce, fashion, or art—are chugging along just fine through the crypto bear market.

Art Blocks may be demonstrating that projects born out of Web3 don’t need to be solely defined by it. Increasingly, that approach is starting to look like the path forward for crypto culture.

Editor’s note: This article was updated to clarify the eligibility for claiming a Friendship Bracelet NFT.